Here is a great winter recipe. Canederli are a specialty from South Tyrol, Trentino-Alto Adige, a region in Northern Italy close to Austria, were they are called knödel.

They are a sort of gnocchi made of stale bread. And like all specialties, there are as many recipes as there are families! There are veggie canederli with spinach or mushrooms; there are canederli with meat, like speck which is a typical smoked bacon from Trentino.

Here is a traditional veggie family recipe made of spinach and cheese from this region: spressa and asiago. But you can use any kind of hard milky perfect-to-melt cheese such as cheddar, ayrshire cheese, swiss cheese, etc. I do use some French tomme cheese from the mountains.

Canederli is a hearty, gooey and comfort winter food, full of delicious melted cheese, perfect to be shared with family and friends, especially for the cheese fans.

And it is the perfect recipe to use stale bread and cheese leftovers. You can make a lot of canederli at once and stock them in the freezer. Then you’ll just have to boil them directly in salted water for about 10 minutes, and top with butter, sage and grated Parmesan cheese. 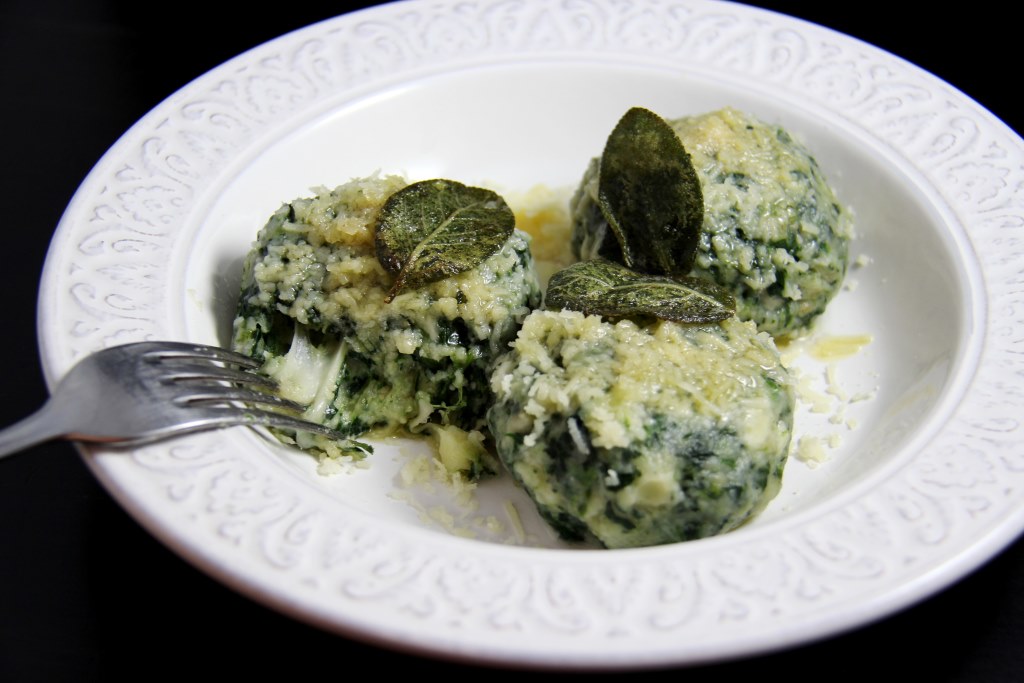 Cut the bread in small chunks and let soften in a bowl with milk.

Squeeze with your hands from time to time to help the milk soak into the bread. Add some milk if necessary until the bread is completely softened.

Wash and drain the spinach. Then cook in a pan with some butter, until the spinach is reduced and the water evaporates.

Let cool then spin between your hands to remove the remaining water.

Peel half of the onion and chop finely. Sauté in a pan with a tbsp of butter, then add the spinach. Salt and pepper.

Let cool then chop roughly with a big knife.

When the bread is softened, spin with your hands to remove the excess of milk.

Put in a big bowl with the spinach and onion, grated Parmesan cheese, flour, hard cheese cut in small cubes and give it a good mix.

Form the canederli with your hands: balls the size of a tennis ball, and roll them in flour.

Boil the canederli in salted water. Like gnocchi, they are ready when they float at the surface (3 to 5 minutes cooking). Get them with a skimming ladle and put them in soup plates.

Top each plate with a tbsp of grated Parmesan cheese and serve immediately.